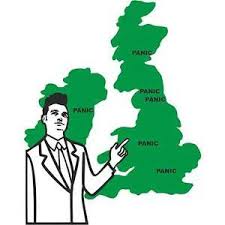 Cast your mind back.

The last time you were exposed to a new system how did you react? Was it a time of hope and excitement? Or of anxiousness and nagging dread? If it was the latter, you may have been suffering from something I like to call ‘scale panic.’

First up, let me define what I mean by this in a testing context:

‘When a tester first encounters a new system they need to understand and evaluate, the cognitive load from understanding the parts, interactions and boundaries is too intense. The tester often enters an agitated and slightly disgruntled state of paralysis for some time after scale panic has taken hold.’

The subsequent testing approach and effectiveness can suffer as the appreciation of the big picture means crucial context is often left undiscovered. So, why does this phenomena occur I hear you ask. Well, every situation is different of course but I believe it is centred around a key trait for a tester, awareness. To clarify, let’s decompose:

I’ve been thinking about this a lot. Mainly because as (mostly) a career consultant, I encounter new systems all the time. I have built a personal model, expressed above. Next time you encounter a new system, think awareness. Think about the people, technology, depth, time and existential aspects of the system. Then map that, a useful output for everyone, and a challenge to existing assumptions.

Use it as a guide for your testing, always remembering that it’s a model. It’s wrong, but it’s very useful.